On February 27, 2020, Dr. Elizabeth Prado and Dr. Seth Adu-Afarwuah launched a new project in Ghana funded by $2,600,000 from the US National Institutes of Health. The project will be the first long-term follow-up in Africa of a randomized controlled trial in which the intervention group received a fortified food during most of the first 1000 days, from early pregnancy through 18 months of age.

Nutrients such as vitamins, minerals, and fatty acids are the building blocks for children’s healthy brain development. Much of the brain’s structure is laid during pregnancy and early childhood, when the brain and nervous system are developing very rapidly. Many pregnant women and young children do not eat sufficient nutrient-dense foods that contain these essential nutrients. If these nutrients are not available during critical periods when the brain is developing rapidly, there could be long-term effects on the structure and function of the brain and nervous system.

This new project will follow up children at 8-12 years of age whose mothers participated in a randomized controlled trial of nutritional supplementation when they were pregnant 10 years ago. The

original trial, the International Lipid-Based Nutrient Supplements (iLiNS) DYAD (mother-child dyad) trial, was led by Dr. Kay Dewey at UC Davis and Dr. Anna Lartey at the University of Ghana and was funded by the Bill & Melinda Gates Foundation. Pregnant women and children in the intervention group received lipid-based nutrient supplements (LNS), made from peanut paste, vegetable oil, and milk powder, with added vitamins and minerals. While small-quantity LNS provides only a small amount of calories per day (~118 kcal), it is packed with the vitamins, minerals, and fatty acids that are needed for children’s growth and development. In the control groups, women received a daily micronutrient capsule, similar to a pre-natal multi-vitamin, and the children did not receive any supplement.

When the children were 4-6 years of age, we found that children in the LNS group had fewer social-emotional difficulties compared to the control groups, especially those from home environments with low nurturing care and learning opportunities. The aims of the new project are to see whether we find the same pattern when the children are 8-12 years of age and to understand the neural mechanisms of protective effects of early nutrition on the development of social-emotional difficulties among children in Ghana. This will be the first randomized controlled trial to assess long-term 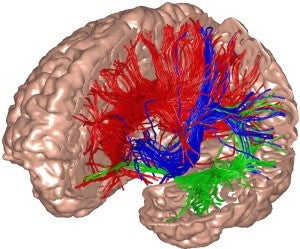 effects of early nutritional supplementation on nervous system development through combining methods to assess neurophysiology in both the central and autonomic nervous systems, including structural magnetic resonance imaging (MRI) with diffusion tensor imaging (DTI) and measures of autonomic nervous system (ANS) activity, including electrocardiogram and impedance cardiography. Co-investigators are Dr. Paul Hastings and Dr. Amanda Guyer at UC Davis, Dr. Adom Manu and Dr. Benjamin Amponsah at the University of Ghana, and Dr. Brietta Oaks at the University of Rhode Island.